Also, let me know if I shouldn’t be posting gifs. I’ve compressed them to under 1MB (this one is 122kB).

I’ve had the exact same issue. Trying to build a Dwarf Ranger and the same thing happened with the ability scores. Also when “Default” is chosen for the ability boost options it still shows that you have three boosts to choose from? Definitely not working as intended lol.

Thanks both, we’ll take a look at it!

For these instances, could you tell me the specific selection path you’re taking when getting to this point? I’m having a hard time replicating this issue on my end.

Absolutely. I am going through step by step as I write this to see if it’s still happening. I’m using Firefox in case that matters.
First, I either create a new character or pick a character slot I’ve already started but made no decisions in yet. For this example I’m doing the second one since the character I tried to build was never saved when I found the weird ability score thing happening.
Second I go through the screen where I name my character and pick their level. I’m just doing level 1.
Third, I choose the Dwarf Ancestry.
Fourth, I choose the Default ability Boost option
Finally, I click Ability Boosts. My con and Wis show 18, and my cha shows 2.
I did my best to take a screen shot but I’m blind so I have no way of knowing if I actually got it on the screen, at least not one that I know of. 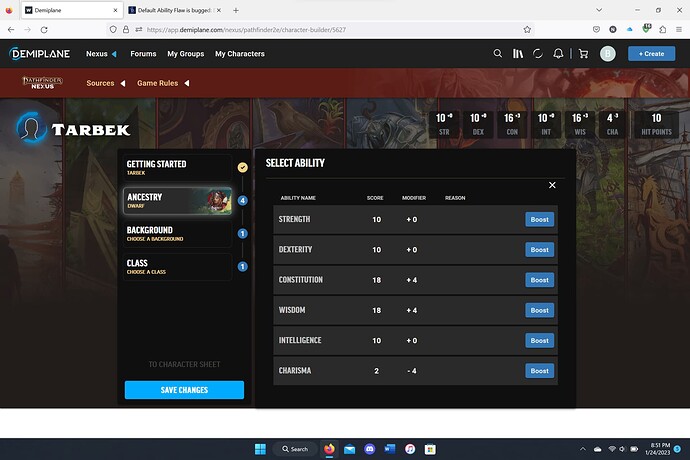 Like Baelor above, I also was using Firefox. Haven’t tried it on Chrome.

We think it might be a Firefox vs. Chrome thing, but are still trying to hunt down the specific root of the bug.

I’ll give it a shot in Chrome later.