The newest Pathfinder rulebook, Dark Archive, is now available. This book features two new classes (the Psychic and the Thaumaturge), new spells, feats, and several adventures crafted to introduce the book’s exciting new concepts to Game Masters and players. That’s not all: longtime Pathfinder fans will appreciate how it fits within the world of Golarion and its lore.

In a recent video from Paizo LIVE, Senior Designer James Case remarked that the book’s title comes from ‘The Dark Archive’, a faction within The Pathfinder Society from the game’s first edition known for collecting weird things and investigating mysteries. However, when The Pathfinder Society was reorganized as part of the move to Pathfinder 2nd edition, The Dark Archive was dissolved and its responsibilities shuffled into various other departments.

Beyond the manual lie the remnants of our casefiles, the only ones I could abscond with before my access to the Pathfinder Society’s records was revoked altogether. You might notice that eight of them have more exhaustive notes than the rest; these subjects are what remain of my personal caseload. Some, I had been investigating for years, but I have reason to believe that the group itself, as a whole, is more important than the sum of its parts. The files have to be connected, in some way. I know it. — Introduction of Dark Archive

As the introduction makes clear, this book was written as if someone with access to The Dark Archive in Absalom went and salvaged as much information as they could before their access was revoked during the dissolution of the faction. It raises an interesting question as to who the author of the foreword (signed as K.H.W.) is and how they may become important to future Pathfinder Society modules. 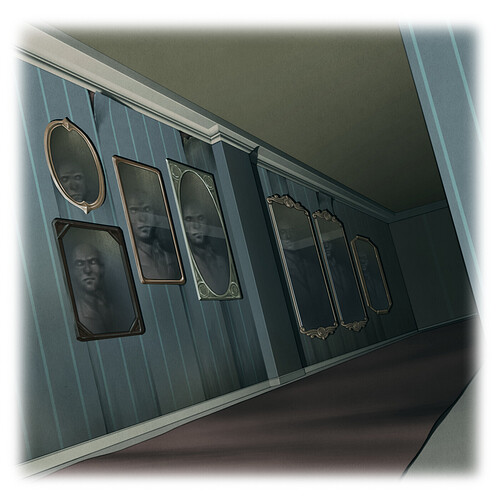 09-07-Pathfinder_20_Replicating Mirrors1400×1400 285 KB
Caption: A hallway with blue wallpaper that is filled with mirrors. In each mirror is a gray silhouette of a man staring out at the viewer.

Much of the Dark Archive’s contents are referred to as “The Stolen Casefiles”, which cover a wide range of topics from cryptid monsters and mysterious artifacts to temporal anomalies and powerful psychic spells. Each casefile comes with its own short adventure that features the new rules, feats, spells, and items in the book. This is a unique approach that helps GMs incorporate these new rules into their new or ongoing campaigns easily. From investigating the cryptid guardian known as The Birchfrost Beast to exploring the dangerous mindscape in The Last Dream, Dark Archive weaves its mechanics and lore together through the recovered case files of K.H.W. in adventures for 3rd to 12th-level characters.

Strange creatures seem to come up most often at the fringes of society, where they can easily fade into the background. The town of Birchfrost, off the Lake of Mists and Veils, has a legend of a local creature, once responsible for protecting the town. If there is anything more to this so-called “Beast of Birchfrost,” I am sure that the slightest change in circumstance might herald a dangerous change in the Beast, one the Archive would do well to mind. — K.H.W., Cryptids of Dark Archive

Dark Archive introduces two new classes and their corresponding archetypes, but many of its new mechanics are available to all players. Aftermath feats, presented with the Cryptid case files, are available after a harrowing encounter. This unique approach to feats functions as a reward for characters who faced death and survived, granting players the opportunity to plumb their in-game experiences for new mechanical benefits. A great example of this is Sink and Swim, which allows you to move through water at a supernatural speed.

Your body looks like it’s made of flowing water, clear and pristine, providing a natural grace to all your movements. You gain a swim Speed equal to your land Speed. If you already had a swim Speed, it’s increased by 10 feet. You gain the Water Transfer activity, which enables you to teleport through a body of water.

Water Transfer (conjuration, primal, teleportation, water) Frequency once per minute; Requirements You’re on land and adjacent to a body of water; Effect You sink into the water and emerge back onto land in another space within 120 feet that’s adjacent to the same body of water. You can transport yourself, any items you’re wearing and holding, and up to one other willing creature.

While there are many options within for players, Dark Archive provides plenty for Game Masters, as well. The Cryptids case file offers a variety of adjustments, such as Rumored or Experimental, that you can use to customize your favorite monsters, and the Curses and Pacts case file explores curses and contracts with which to tempt your players. 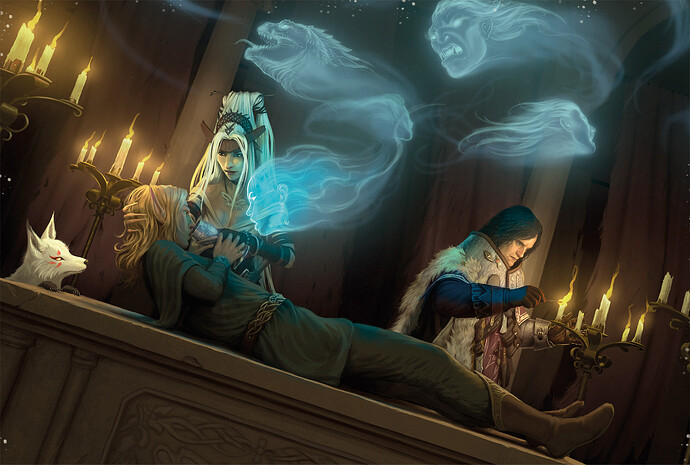 11-07-Case Files - Cults rituals half Opener - Page Border2000×1349 360 KB
Caption: Spirit faces swirl in the air over an elf lying on a ceremonial table. They are being assisted by a woman with long, white hair who is holding a cup for the elf to drink from. At the other end of the table, a person in ceremonial garb who is lighting candles on a candelabra. A white fox with red markings on its face is looking on, with its paws up on the table.

Full of options for Game Masters, players, and homebrewers alike, Dark Archive is a deep entry to the world of Golarion and a must-have for any Pathfinder library. Secure your copy now and begin exploring the archives right here on Pathfinder NEXUS. 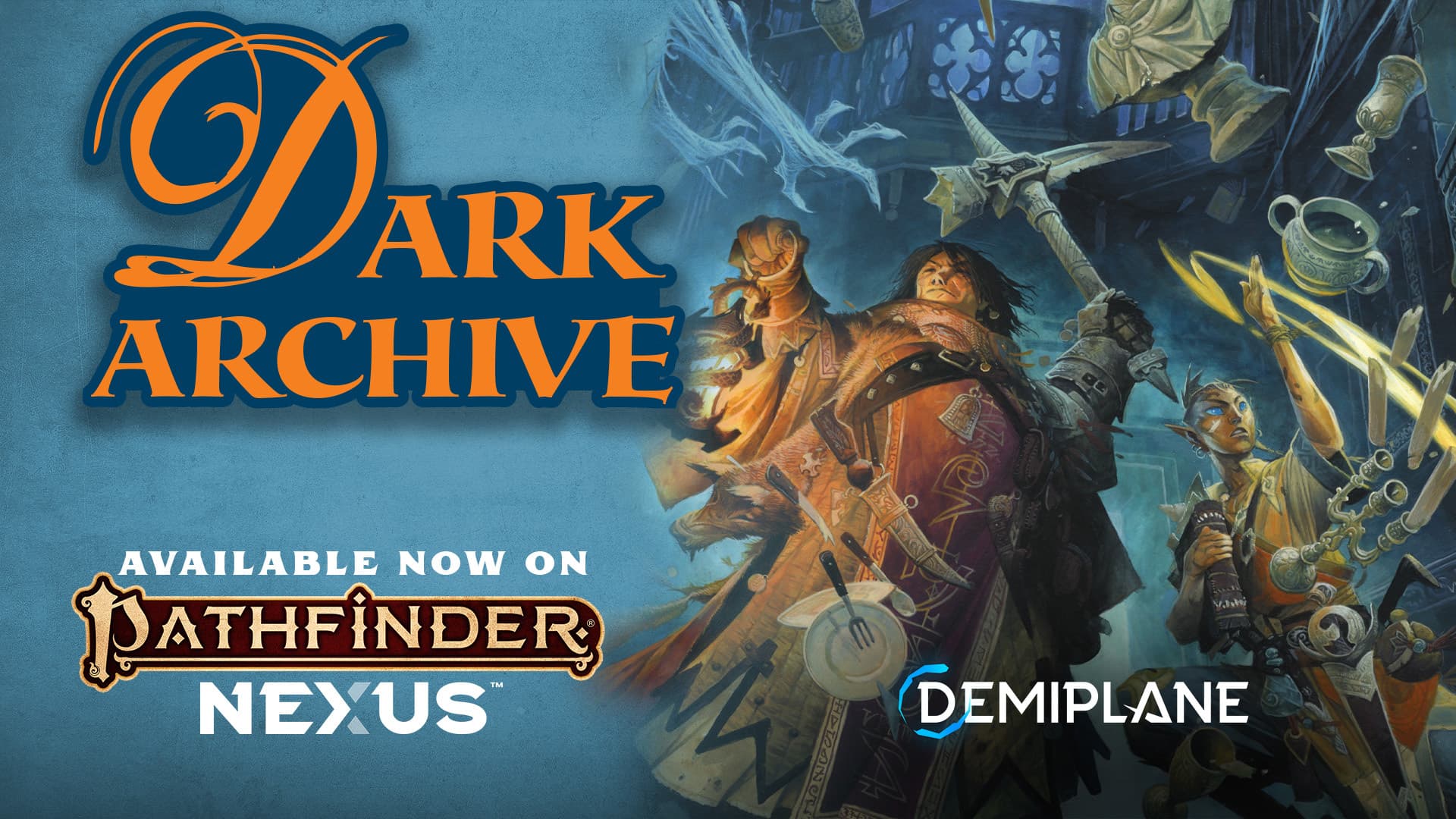