Game needs some villains. I’m enjoying it with my group. Anyone posted any villians?

I’d love to see some too.
So far we’ve got Hydra mooks, and evil versions of the heroes in the playtest adventure.
I might (and that’s a SLIM CHANCE) try and make some this weekend…

A player of mine wrote up this Doc Ock. I plan on running Day of the Octopus as a playtest. 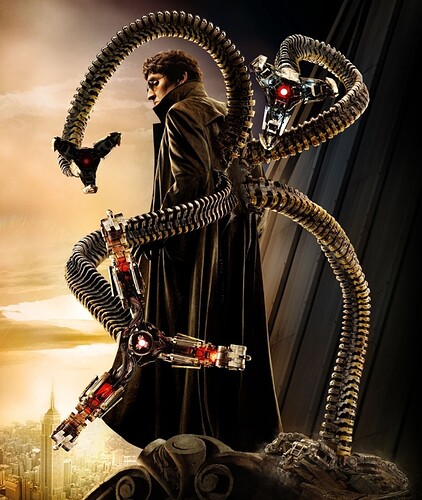 Background
Dr. Otto Octavius was once a brilliant and respected nuclear physicist, atomic research consultant, inventor and lecturer. He designed a set of highly advanced mechanical arms controlled via a brain–computer interface to assist him with his research into atomic physics. The tentacle-like arms were resistant to radiation and were capable of great strength and highly precise movement, attached to a harness that fit around his body.

During an accidental radiation leak that ended in an explosion, the apparatus became fused to Octavius’s body. It was later revealed that the radiation had mutated his brain so that he could control the movement of the arms using his thoughts alone. The accident also seemingly damaged his brain (although some have suggested that what was interpreted as brain damage was, in fact, his mind rewiring itself to accommodate four extra limbs), and the scientist turned to a life of crime, first taking the hospital hostage and calling himself “Doctor Octopus” from the derogatory name that his co-workers had given him. He clashed with Spider-Man and would go one to become one of his greatest enemies.

Personality
A highly intelligent and prideful scientist, Doctor Octopus has all the classic traits of a narcissist: delusions of grandeur, an unhealthy obsession with success, and an inability to take any form of criticism. Like any narcissist, he refused to come to terms with his own mistakes and shifts all his problems onto others (especially Spider-Man), and possess a stubborn temper that often makes him difficult to reason with. Vengeful against the world and those who stand in his way, he displays little care towards the lives he endangers. He is, however, very charismatic and calculating, rarely actually losing his temper and remaining perpetually suave and sophisticated, even in the face of his opponents.

This is really good, actually. I have been doing some characters myself and the system seems to do well with a MSHRPG conversion to MMRPG, if I say so myself. I typically do the ability conversion to determine the rank, then fill in the blanks (IE number of powers, attributes, traits) built around that. If you’d like, I can share the converter that I use.

Community Ran Websites will be the “solution” for this game or I personally think the game will die.

I am old enough to have played the TSR Marvel RPG. And over the years there became such a club known as the Dead Game Society or DOS. These are people who loved games that went out of print or fell to way side but still dedicate themselves to running the game(s) at conventions or at home.

The Old TSR RPG has a STRONG small fanbase still dedicated to it. And there was the Marvel Heroic Roleplay version in 2012 that Marvel dropped or didnt want to fund past 2 years. BUT, you can websites made by fans who create all kinds of resources for it. Marvel Profiles etc.

And thats the ONLY way I personally feel this game will survive. As the per the Rule Book stating in its pages “There are a lot of GAPS” to fill. So this game in its current state needs a Linux type of following. People have to create Homebrew fixes or a Community has to form to make an expanded online guide so there is some kind of organized play to follow. Or else folks going to into too many various ways to play or debates on how to play while gathering online or at conventions.

So Marvel, Roll20, Demiplane or someone needs to coordinate with them on creating a Fanbase website for files people can grab. 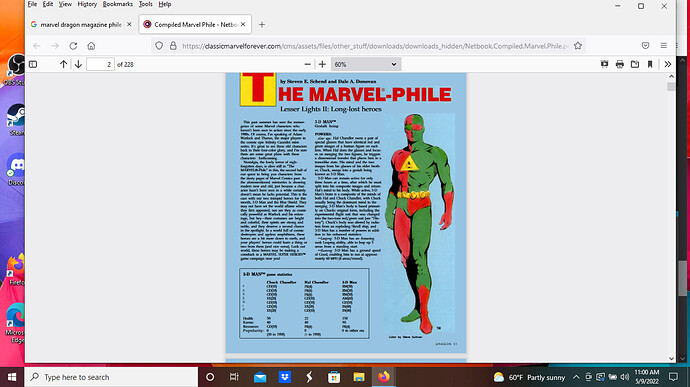 I agree. I think one of the biggest problems that I see from the playtest is there is not really anyplace to post feedback yet, other than a poll… which honestly seems more like it is fishing for game player demographics than anything else. Biggest problems so far:

*Character creation is non-linear and you have to flip back and forth through the booklet quite a bit.
*Some powers (IE. flight) are not available to Rank 1 characters. Flight is a basic power that should not require Rank 5 to get.
*If they are trying to get the 5E and PF players involved, having a clear leveling system is important to build. The possibility of having heroes start at Rank 1 is a joke. 5 ability score points won’t work. 1-2 powers max? It’s almost as though Ranks 1-4 are meant to be origin stories and no hero will ever play at those levels.
*Some of the missing powers sets that should have been included in the playtest booklet are: telepathy, elemental powers and speed (even as a utility power). These are powers that players want and making them wait until 2023 for them is painful.
*The playtest book should have come with at least 5 villains of various ranks. Hopefully, online resources will be available soon.

This game has potential, but it is going to die on the vine without feeding the fanboys. Just my two cents.

Yeah, Matt Forbeck who hand a hand in developing the game can be found on Twitter and he is very kind and responsive to his Social Media. I did message him in which he linked me to the Marvel Feedback page. And I already did that a week after getting the PDF.

Being an old gaming Dinosaur, well I guess where I live makes a big difference. I live in the midwest in a city of 30,000. There are 2 game stores here that barely survive. Like most Game Hobby Stores, Magic the Gathering and D&D has carried them for decades. One did go out of business but was restored back to Life by another buyer. I should say there is a 3rd Gaming store, Warhammer. They moved in a few years back because the one hobbystore had a decent league until then.

That being said. Its difficult to get a stable gaming group with any RPG system and even harder when it comes to Super Heroes. My long time acquaintances just prefer D&D or Pathfinder. No matter how many Orcs, Vampires or Dragons they have slayed for decades.

Discord sure, Roll20 can be silent for months or even a year and then - Hey, I saw your old post. Do you still play? Now Demiplane.

I could try and write Marvel I suppose. My experience with being just some random dude trying to contact powers that be ya never hear anything. So taking the time to write something out just to send it and say did they get it? I dont know.

There is 3 Marvel Heroic RP fan websites with resources. This being one of them. 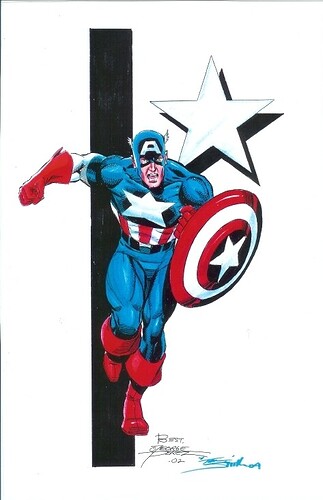 Oh yeah, almost forgot the whole point to the gaming store story. I went there yesterday and they didnt even have the Play Test Rules. I figured they wouldnt and why I bought the PDF on launch day. Took the chance they might as they have Marvel Champions, Marvel Legends, Marvel Crisis but no RPG test rules.

So hopefully Marvel puts some resources into the RPG game. Would be nice of they release some free public profiles to keep folks interested. Otherwise its a lot of work and guessing to create scenarios, but also to have the same time schedules for getting together and gaming with others.