So we are new to the PF2E ruleset, moving over from 5E… some rules are just not as easy to interpret…

Invisibility, darkness, and how the observed/observers transition between states was one of them. We created a quick cheatsheet to handle this that our group uses and my buddy said I should post it for others.

NOTE- Stealth while similar transitions much faster from unnoticed/unobserved to observed. 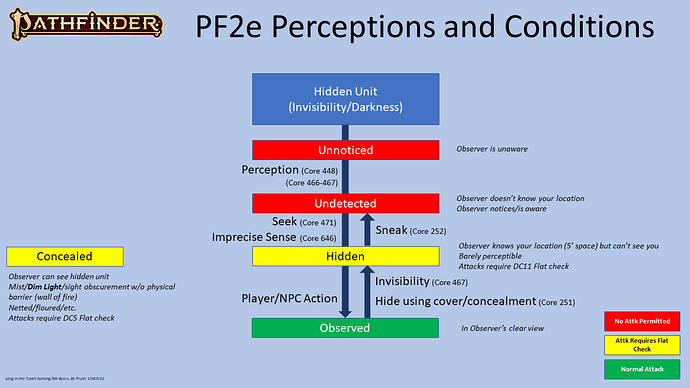 My group is the same, and they haven’t even dealt with a situation yet but in some of the games I have played for PFS, I’ve seen situations I know will confuse them so this is great!

We are spending the first couple of weeks just doing small scenarios; close quarters combat in crypts ;open field battles among dunes; flying opponents; stealth battles against driders, caverns and mines that require leaping/climbing/levitating all just to figure out the rule differences before we start playing.

The group took an 8th level party they are running and converted them over. The characters have much more depth.

This is replacing the learning we would have had leveling under the new system. It’s really helping not only with PF2e but Foundry as well.