Hi there folks! Amazing work on getting things to this stage, and I’m looking forward to watching this evolve.

I love the general feel and layout, and I’ll have some more thoughts I’m sure when I play around a bit more, but so far it’s looking pretty great.

I’d have had a few consistent issues, mostly in Safari on Mac (latest version of Safari and macOS) and on iPad (iPadOS 16.1.1), though a couple of them also appeared when I tried Chrome on the Mac. 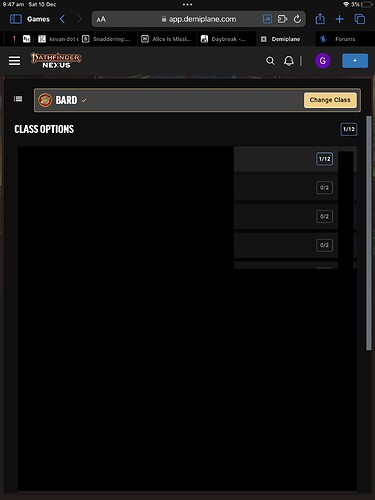 Hope these are helpful in chasing down some bugs!

Thanks for sharing this! We haven’t done any work yet to get the builder ready for tablets or mobile, so that issue with levels not loading will likely be resolved when we get to that.

Everything else has been noted.

Thanks Joshua! Note that the level options display error isn’t confined to the iPad - I also see it on Safari on the Mac. It’s a bit less consistent in terms of how many of the early levels don’t display, and sometimes they are briefly visible.

Here are a couple of screenshots showing the same problem with the same character, this time on Safari 16.1 on macOS 13.0.1. (I have a content blocker installed, but I whitelisted the Demiplane site to prevent any issues there.) 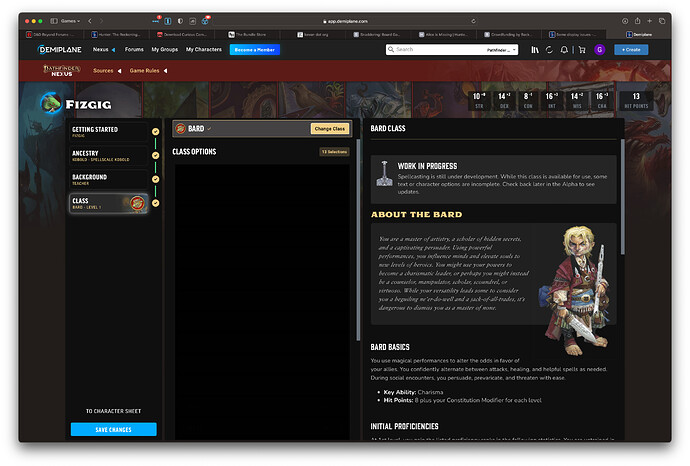 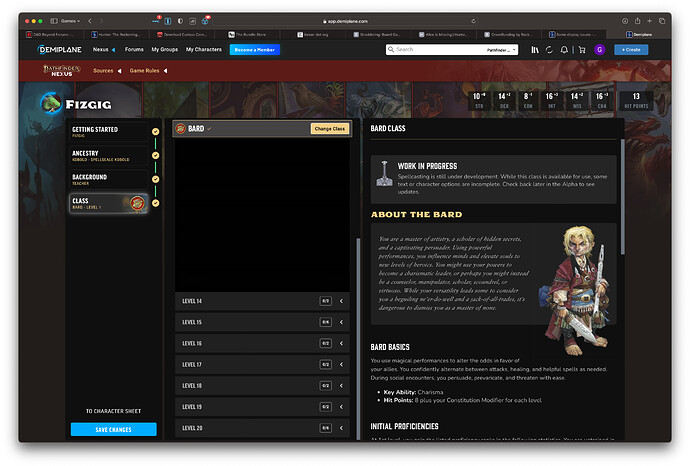 I figured I’d piggyback onto this display comment. With the scaling I use to see anything, the character interface only occupies about 2/3 of the screen, and appears cut off at the bottom.

Thanks for the clarification, and that additional feedback. We’ll take a look!

I didn’t see the following issues listed on a skim through the forum, so here are a few more things I’ve noticed; still on macOS, but I’ve switched to Chrome 108.0.5359.124 for now.

Here’s some more specifics as an example from my level 3 Swashbuckler, Jean-Reynard. (Yes, he’s a catfolk with a fox name; I don’t own the book with Kitsune in it.)

While viewing the Skill Feats available at level 2 I see correctly next to Class that I have 3 choices yet to pick: one from level 2 (I’ve already chosen a Swashbuckler Feat), and two from level 3.

If I click on “Background” without choosing a Skill Feat, the number next to Class changes to 53. (At a guess, this might be the total number of available choices available at all levels?)

I am unable to see or select feats not displayed on the first page of the list, as the numbered page buttons, and back and forward buttons, move the position marker at the bottom of the list, but do not change which feats are displayed.

If I click the Ancestry section, and then return to the Class section, I’m unable to go back to the Skill Feat panel listed under Level 2. It’s visible in the list of options, but only the general info for the Swashbuckler Class is displayed. 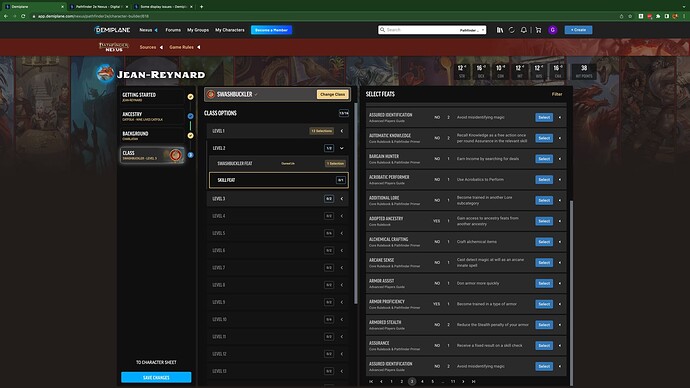 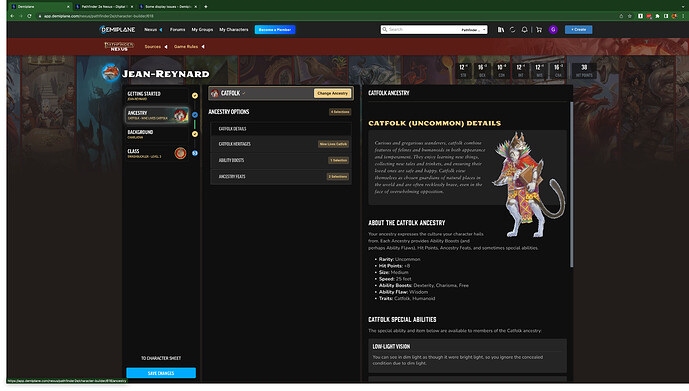