Not sure if I’m the only one with this problem. I’m using Firefox on windows 10 and cannot scroll down to select charisma when picking ability boosts

Thanks for reporting this. What device are you using the character builder on? We haven’t done much optimization yet for mobile and tablet views, which could be what you’re bumping up against.

I guess I forgot that. I’m using a Lenovo Legion
Intel(R) Core™ i7-8750H CPU @ 2.20GHz 2.21 GHz
It acts the same when I boot to Linux Mint also running firefox. I haven’t tried other browsers but am willing to take suggestions.

I just wanted to be sure it wasn’t an issue with screen size. It could be something with Firefox though. Some display things are different between browsers until we can go in and fix them specifically for each one. I’ve had no issues using Chrome, if you have it and want to try and let me know if you encounter the same issue or not.

Even with chrome I’m missing the very bottom in the skill and feat selection screens, although I’m now able to access Charisma when bumping up my stats. Also, I see that the Beginner box isn’t included in the build, specifically the deckhand background.

Thanks for the fast responses!

Thanks for checking into it for me. We’ll have to dig into that on our end for firefox. The skill and feat lists are often long enough to need a scroll, so no surprises there. If you’re interested in helping as we look at things, a screenshot of what you’re seeing in firefox would be super helpful. You’re welcome to just drop it here in a reply. Or even a side by side of firefox and chrome would be useful.

Firefox and chrome. This is the best way to see the bottom of the page is cut off 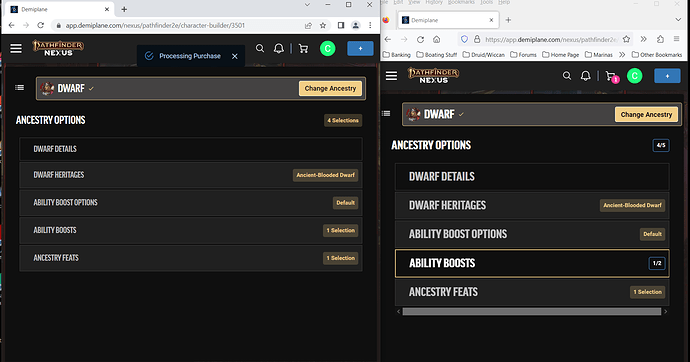 Thanks for sharing this! We’ll dig into it.