Welcome to the Marvel Multiverse Role-Playing Game NEXUS on Demiplane!

We have shared several announcements in the past five months about some of the greatest games in the world coming to our Nexus platform - Pathfinder Nexus is in Early Access, and World of Darkness Nexus and Free League Nexus Early Access will start this year. Development on the platform is progressing well - the team is committed to making tabletop roleplaying sessions better for all of the great games we will support. Today we can share that list has grown, kind of like Mr. Fantastic reaching for the sky…

The Marvel Multiverse Role-Playing Game NEXUS is launching from the start of the playtest next week, April 20th!

You can check out the full press alert below - we’ll keep you posted here and in all of our channels as the playtest progresses: 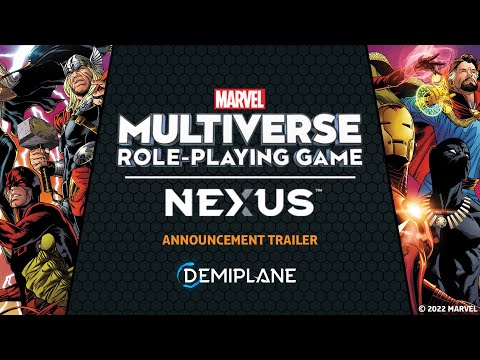 The Marvel Multiverse Role-Playing Game NEXUS makes creating your own Super Hero saga fast and easy. Players have access to the full digital content, legendary Marvel Super Heroes, and game mechanics from the Playtest Rulebook, including global search, advanced filters, and interactive tooltips designed to let you find everything you need during your tabletop role-playing sessions. The Digital Reader and Game Compendium are perfect for any way RPG fans play: in person with friends, or virtually online. The platform also enables users to host and discover games, find players, keep track of game sessions, and interact using video and voice chat. The first phase supports the 120-page Playtest Rulebook designed to give a heroic Marvel RPG experience while providing the opportunity to shape the full release of the game through ongoing feedback.

“As a True Believer for as long as I can remember, the Marvel Universe has had a massive impact on my life – I doubt I would be doing what I’m doing today without being a Marvel fan,” said Adam Bradford, Chief Development Officer at Demiplane. “With two of my greatest loves colliding in Marvel and tabletop role-playing, I can’t wait for fans to experience this level of digital support from the very start of the playtest with the Marvel Multiverse Role-Playing Game NEXUS.”

“With the upcoming release of the Marvel Multiverse Role-Playing Game: Playtest Rulebook, the Marvel team is so excited to extend our new role-playing game to an immersive digital experience,” said Carlos “CJ” Cervantes, Jr., Project Lead of the Marvel Multiverse Role-Playing Game. “Working with a partner like Demiplane helps us offer high-quality digital tools that will make the playtest as accessible and convenient for players as possible. We can’t wait for fans to dive into the game for themselves!”

Demiplane is an online platform that provides tabletop RPG players a home for digital tools, content, and services to discover and play their favorite games. It is an ever-expanding experience that brings fans of tabletop role-playing together in one place to make playing games better—including the upcoming official digital toolsets Pathfinder NEXUS, World of Darkness NEXUS, and Free League NEXUS.

About Marvel Entertainment
Marvel Entertainment, LLC, a wholly-owned subsidiary of The Walt Disney Company, is one of the world’s most prominent character-based entertainment companies, built on a proven library of more than 8,000 characters featured in a variety of media for over eighty years. Marvel utilizes its character franchises in entertainment, licensing, publishing, games, and digital media. For more information visit marvel.com. © 2022 MARVEL

If we ordered through our FLCS, will there be a code in the book to access Demiplane’s version of the Marvel game? Or will we have to sub separately?

Thanks for reaching out - the digital version of the Playtest Rulebook is a separate product and purchase. I hope you’ll try it out here…we have loved putting it into this format and have already found it really useful in our own playtesting of the game!

Quick question. I’ve already signed up for the Marvel playtest and will provide appropriate feedback (looking forward to it!). Several associates have asked if Marvel will release any physical copies of the game (such as rule books, mini’s, dice, etc.,) or is this an only digital experience.

Thanks for your time.

Awesome to hear that you’ve signed up for the playtest! Yes, Marvel will have physical copies of the game in addition to the digital version in the Marvel Multiverse Role-Playing Game Nexus. If you’re interested in the physical copy, you should be able to find it through your standard book channels and at your local comic shop.

Thanks Josh for the quick reply. Looking forward to tomorrow. Take care.

Is there/are there plans for a character creation digital tool for MMRPG?

Is there/are there plans for a character creation digital tool for MMRPG?

I’ll share the answer I posted from another thread:

Where is the characters sheet?

Hello and thanks for the question.

The Marvel Multiverse RPG Nexus has launched with the two core features we mention on the site - the Digital Reader and the Game Compendium.

We do intend to have a character builder and digital sheet for the Marvel RPG eventually, but we have discussed with Marvel, and we want to see how the early playtest goes to gauge how much core mechanics might change before we dive too deeply into creating a tool to create characters.

We a) don’t want to have wasted development effort that gets scrapped quickly over any rules in flux, and b) want to be sure that we don’t end up with characters using outdated rules that might cause confusion as we get closer to the full game.

But our team is very eager to bring that kind of functionality to life, so keep an eye on updates and we will share as we have them.

The short summary is we plan to do character management, but it won’t be available until a bit further down the road after Marvel signals we’re good to start development on it.